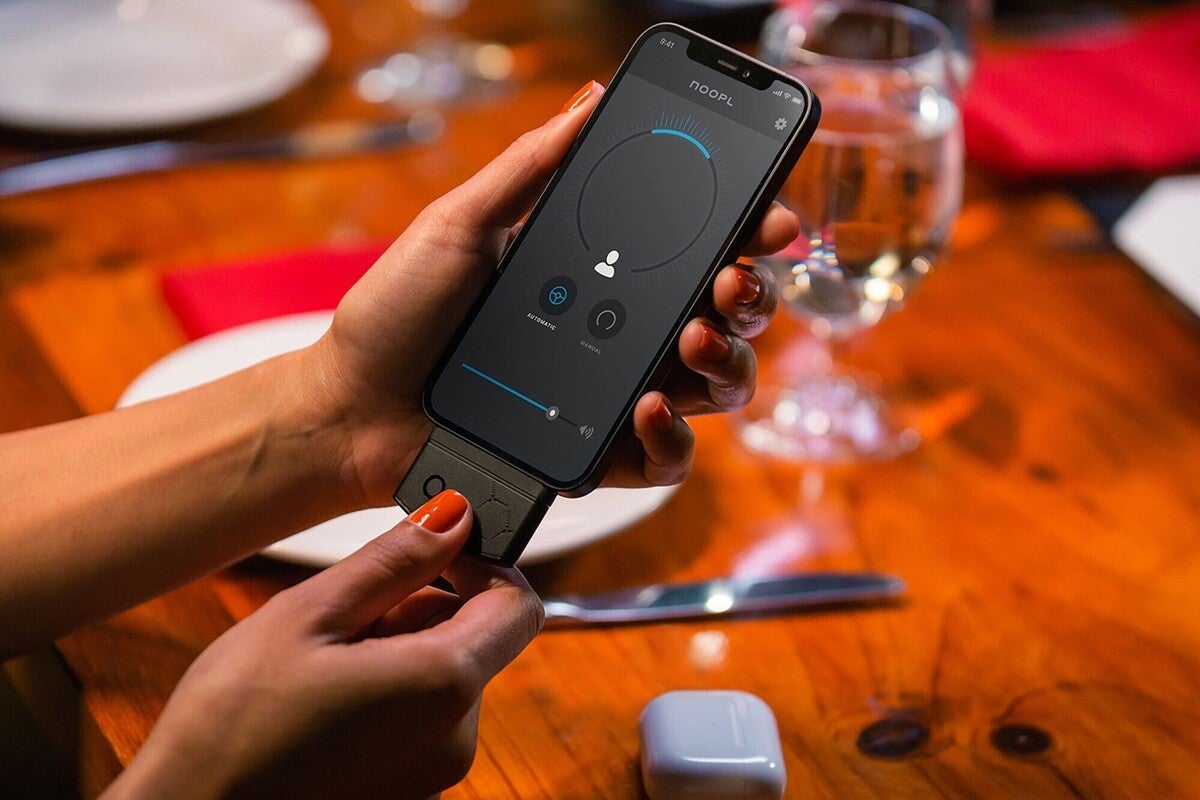 Anyone over 40 has probably had trouble understanding what a companion is saying in a noisy restaurant or bar. Noopl, from a new company of the same name, is an Apple MFi Certified accessory that, in conjunction with an app dubbed Noopl Listen, is specifically designed to address this problem.

Using technology licensed from the National Acoustics Laboratory in Sydney, Australia, Noopl plugs into the Lighting port on an iPhone or iPad. It has three digital MEMS (microelectromechanical system) microphones arranged in a triangular array, a sophisticated digital signal processor (DSP), and a head-tracking system that works with Apple AirPod Pro earbuds (more in a moment). Using a technique called beamforming, the microphones amplify sounds coming from a particular direction while reducing the level of sounds from other directions.

[ Further reading: The best headphones you can buy ]

The app provides a super-simple user interface that lets you control the width and direction of the beam as well as the volume of the output. In Automatic mode, Noopl establishes two-way communication with one or two Apple AirPod Pro earbuds and tracks your head movement, adjusting the beam direction to stay in front of you.

You can also select manual mode, which works with any headphones or earbuds. In that case, the beam direction does not move with your head; instead, you manually point the beam on the app screen. In both cases, you can also adjust the width of the beam. The DSP also automatically detects if the device is being held in the hand or sitting on a table top, which changes the acoustics.

During a Zoom meeting at the Pepcom Digital Experience during CES, the company played a recording of Noopl’s CEO, Tim Trine, using the system while surrounded by speakers simulating a noisy restaurant. One of the speakers played someone talking to him, while the others played the background noise you’d hear in such an environment. When he looked at the speaker carrying the conversation, you could clearly hear what the person was saying, but when he looked away, you couldn’t hear it at all. Very impressive!

High-end hearing aids often have a similar feature, but it typically doesn’t work as well as Noopl, because hearing aids are very small, so they can’t have widely spaced microphones to facilitate effective beamforming. Even worse, hearing aids can cost thousands of dollars, while the Noopl will retail for $199 when it becomes available in early February. There will be an Android version by the third quarter of 2021. I look forward to reviewing this one!