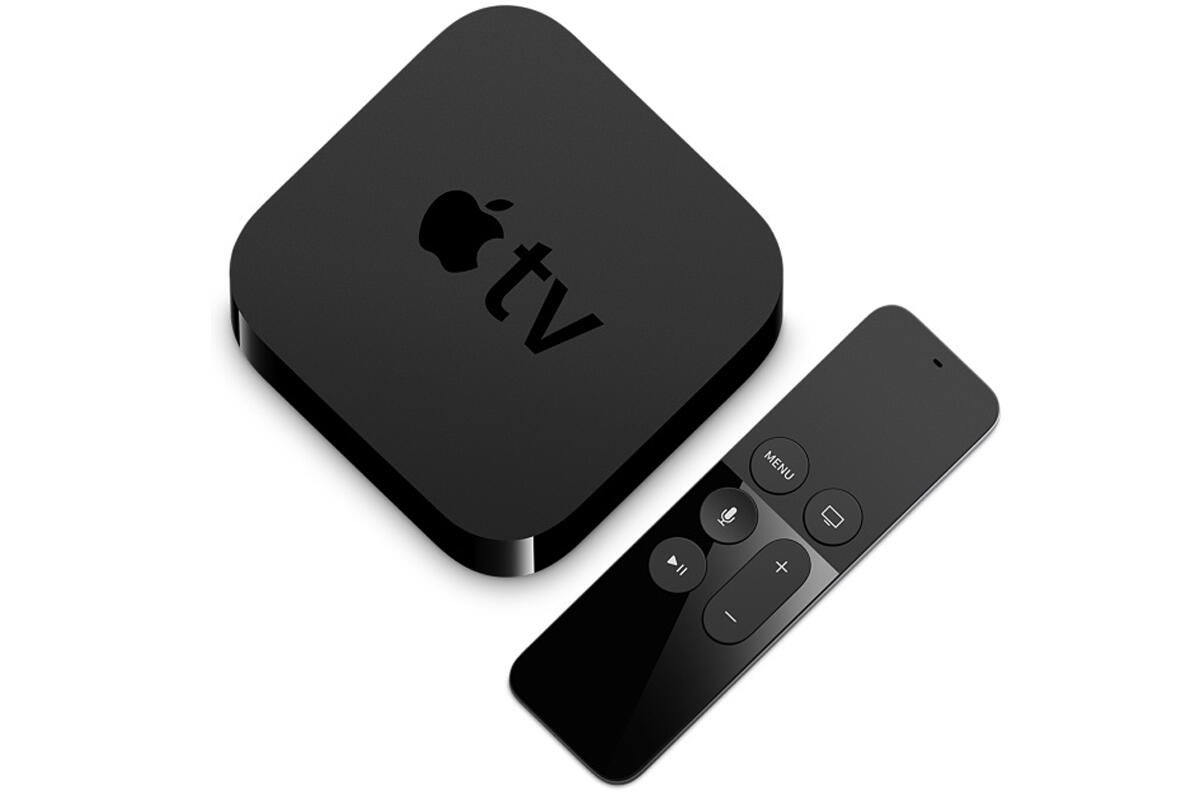 Apple TV has grown up a lot since its iTV days. It’s not just for video rentals and purchases anymore—Apple TV handles just about anything we watch, from House of Cards to Game of Thrones and Major League Baseball games, and now that also includes Apple TV+ content and Apple Arcade games.

With an extensive library of apps, Siri support, and a drop-dead simple interface, Apple TV is one of the underrated players in Apple’s lineup. Just like all those years ago, it’s still the device that “completes the story” of Apple’s entertainment ecosystem, and even without some of the bells and whistles of its competitors, Apple TV is still one of the best streaming boxes you can buy—from SD to HD to brilliant 4K.

And we’ve got everything you need to know about it. Whether you’re buying your first one or just want to learn a few more tricks, make sure to bookmark our guide to Apple TV and tvOS as we keep it updated with all the latest news, features, tricks, and tips.

In the Bloomberg Technology newsletter on December 22, 2020, Mark Gurman wrote about the Apple TV hardware and how it is not able to compete with more affordable devices from Amazon, Roku, Google, and others. Apple even makes it hard for its hardware to compete by making its Apple TV+ service available on competing devices. At the end of the article, Gurman says that Apple will release new Apple TV hardware in 2021 with “a stronger gaming focus, an updated remote and a new processor” that should help the device in the hardware wars. Gurman doesn’t provide any other details on the upcoming device.

In March 2020, a rumor came from YouTube site iUpdate, who claimed that the upcoming “Apple TV 6” would come in 64GB and 128GB models. Currently, you can only get the Apple TV in 32GB and 64GB configurations, which look increasingly limiting in this age of hefty file sizes for movies and Apple Arcade games.

iUpdate also claims the Apple TV would get a new Kids Mode that would allow parents to create a separate kids account so parents could have some control over the content their children watch. This is a tvOS 14 feature, so it wouldn’t be limited to the new hardware. On a related note, the YouTube channels claimed the Apple TV would be getting its own version of Screen Time, which sounds plausible.

On May 7, 2020, Jon Prosser tipped on Twitter that an Apple TV with an A12X processor and 64GB/128GB of storage is “ready to ship” (meaning done with development and likely in manufacturing). He couldn’t share an image because of identifying marks on it, but says it “looks like an Apple TV.” No word on whether Apple will ship a new remote with it or not—the Apple TV remote is largely regarded, even among Apple’s biggest fans, as a design disaster.

An upgrade in storage is hardly necessary for streaming video apps, but would be a welcome change for those who run lots of other apps, particularly games. The A12X would deliver significantly better performance. Single-core CPU performance would go up around 25-30% while multi-core performance would nearly double, if reviews of the iPad Pro are anything to go by. Graphics performance, too, would about double the current Apple TV 4K. This would be great for gaming, but the Apple TV 4K is already one of the fastest streaming boxes on the market—Apple’s challenge is price, not performance.

Apple TV 4K is awfully close to being a cutting-edge home theater streamer. Find out more about the Apple TV 4K in our full review.

Apple last updated Apple TV HD in 2015, and at the time, we had this to say: “AirPlay is an extremely convenient way to mirror your Mac or iOS device’s screen to your television, and Apple TV is of course the only set-top box that can play content rented or purchased from the iTunes Store.” Read our full review.

The Apple TV 4K streams 4K content, provided you have a TV that supports it.

What about HDR and Dolby Vision?

Yes and yes. But again, you’ll need an Apple TV 4K and TV that supports it.

What do I need to get started?

Pretty much all you need to buy is an HDMI cable. Any one will do, so stay away from high-priced cables.

If you have a Netflix subscription, you can can upgrade to the premium plan to be able to stream 4K content. Many Netflix original shows are offered in 4K, as well as many movies. You can also find 4K titles on Hulu and Amazon Prime (once it’s available).

Are there any other differences between models?

In iFixit’s customary teardown, it found the two models to be extremely similar but there are a couple minor differences. For one, the power supply in the 4K model is rated for 12V at 1.083A and the non-4K model is 12V at 0.917A. Additionally, there’s a new user-replaceable fan on the 4K model with eight exhaust ports.

Why does the Siri Remote have a Lightning port?

The Lightning port on the Siri Remote is for charging. Depending on how often you use it, you shouldn’t have to plug it in more often than once every few months. To check the battery level, head over to Remotes and Devices inside the Settings app, select Bluetooth, and you’ll see a battery indicator next to Remote.

Is the Siri remote different on Apple TV 4K?

Technically no. But there is a visual change from prior models that aims to prevent people from trying to use it upside down: The menu button has a white circle around it. The new style remote also comes with the non-4K Apple TV.

How do I know if I’m running the latest version?

You can check for software updates by heading to the Settings app and opening the System tab. Select Software Updates and scroll up to Update Software. If an update is available, you will be prompted to download and install it. You can also choose to turn on automatic updates.

How can I test out beta versions?

Apple includes tvOS in the Beta Software Program, so you can download the latest version of tvOS on your Apple TV right now. To get it, you’ll first need to sign up for the beta program at Apple.com if you haven’t already as part of the iOS or macOS betas. Then, head over to the Settings app on your Apple TV and find System. Open it, select Software Updates, and click Get Public Beta Updates to turn on over-the-air downloads. Select the Agree button and then scroll up to Update Software. Finally, click Download and Install, and wait for your Apple TV to restart.

How is AirPlay 2 different from Airplay?

The original AirPlay was essentially an easy way to get content from you iOS devices to your TV screen. With version 2, AirPlay has expanded its capabilities. You can now stream audio to multiple sources, meaning your Apple TV will act as a hub that lets you send music all throughout your house, not just your main home theater system. Additionally, your Apple TV can double as a AirPlay “speaker,” so you can send audio from your Mac or iOS device to your surround sound system with just a tap.

Just like on Macs and iOS devices, Apple TV has a dedicated store for downloading and installing apps. Select the App Store icon on your home screen, and you can navigate and search for apps like you do on your other devices. And they’ll all be designed to look their best on the big screen.

With Single sign-on on Apple TV, you won’t have to repeatedly enter the username and password for your cable provider every time you want to watch an app that requires it. The availability of this feature varies.

If your provider is allows it, you’ll only need to sign in once and every app that requires a cable log-in will automatically be filled in with the appropriate credentials. If your carrier doesn’t allow it, you’ll still be able to store your username and password in Settings, but each app that requires it will still prompt you to sign in individually.

The TV app landed late last year as part of the tvOS 10.1 update, and it serves as a sort of smart grid for the things you’re watching (or might want to watch). Inside you’ll find links to your purchases and rentals, things you might like, and whatever you’re in the middle of watching (like the latest episode of Game of Thrones, for example). However, you won’t find any original programming from Netflix represented in the TV app.

On my iPhone, TV replaces Movies and TV Shows. Why are they still on my Apple TV?

On Apple TV, the TV app functions as more of a guide than a streaming platform, so you’ll be shuffled off to the appropriate app when you find something you want to watch.

How can I play games?

To play a game on your Apple TV, you can download one in the tvOS App Store. Most games use the Siri Remote as a controller, but some will require the purchase of a third-party Bluetooth gamepad.

Can I still stream games from my iPhone?

Yes! To turn on AirPlay Mirroring, swipe up from the bottom of the screen on your iOS device to access the Control Center, and tap the AirPlay icon to mirror the content to your screen. Then you can play the game as you normally would, using your iPhone or iPad as a controller.

How do I use Siri?

There’s no wake command for Siri on the Apple TV, so you’ll need to press and hold the microphone button to speak to it. When you’re done, let go of the button and it will (hopefully) carry out your request.

What can Siri do?

Siri on Apple TV isn’t nearly as robust as it is on the iPhone, but it’s still a pretty useful companion. You can find content using a variety of criteria, including movie name, genre, director, or actor, and there are all sorts of things you can ask while something is streaming, such as, “What did she just say,” or “Skip ahead 10 minutes.” Additionally, you can control Apple Music, launch apps, check the weather, or get sports scores, as well as watch live content using Live Tune-in. You can find a comprehensive list of Siri commands here.

Some channels that offer live streams can use Siri to quickly tune in to a broadcast. You can things like, “Watch ESPN live,” or “Show me the Warriors game,” and Siri will automatically switch your Apple TV to the in-progress stream. Supported channels include: