An essential guide to Apple HomeKit 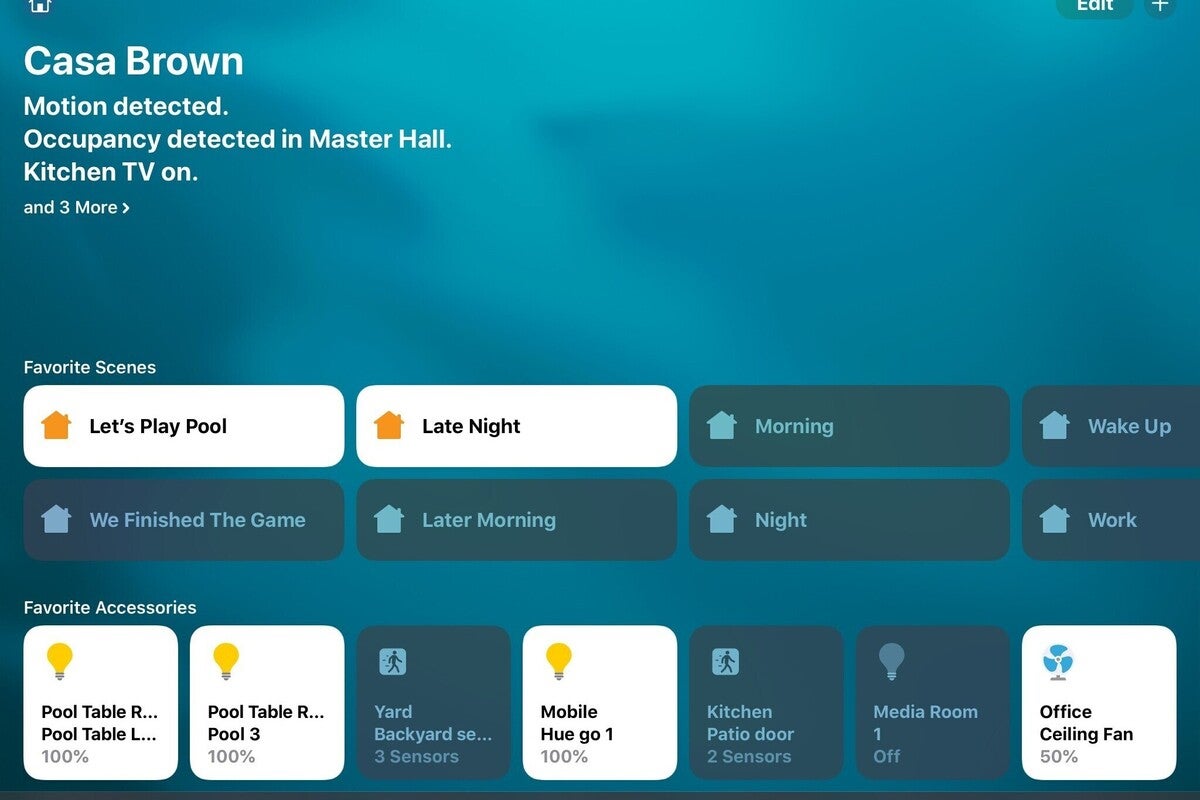 Apple launched HomeKit in 2014 and for many users it remains a bit of a mystery, an outlier in the smart home space that is wound up with the iPhone, Siri, and an unintuitive corner of the smart home universe. What is HomeKit, and is it appropriate for your home? Let’s dig in and break down what it is and how it works today.

While HomeKit is exclusive to Apple and its licensees, it is really just a communications protocol, a framework of technologies that lets your iOS device work with any number of smart home products. Apple currently claims that more than 100 brands of products are now included in the HomeKit universe, including all the usual smart home suspects, including smart plugs and switches, light bulbs, thermostats, motorized window shades, and more.

The centerpiece of HomeKit is its centralized control through the iOS Home app, which is now standard on all iPhones and iPads (and is now part of MacOS as well). Through Home, you have access to all your HomeKit-compatible devices (Accessories), which can be separated by room and assigned to Scenes (in which a number of devices are controlled simultaneously with a single tap) or controlled via Automations (for basic scheduling or as responses to trigger events). Devices that appear in the Home can also be controlled via Siri voice commands, either through an iOS device or a newer Apple TV (third-generation or later) or HomePod smart speaker.

In a nutshell, Home works a lot like any other smart home control app, except that it is not tied to a specific vendor’s product. If your devices are set up through HomeKit, they’ll appear in the Home app. You can also add compatible devices to your HomeKit network after the fact, and that won’t prevent you from using those same devices in other smart home ecosystems.

How does HomeKit setup work?

HomeKit setup is easily its biggest strength. For most products, setup involves using your iPhone to scan a QR code printed on the smart device (or affixed via a sticker). Sometimes the QR code appears on the device’s packaging or manual. Once the device is scanned and the device is powered up, your phone gets to work making the necessary connections. This process has changed a bit over the years, but now it is generally quite streamlined, and I’ve found that HomeKit devices—for the most part—set up quickly and seamlessly.

HomeKit devices can connect to your phone for setup via either Bluetooth or Wi-Fi. You don’t necessarily need an internet connection to get a HomeKit device up and running, but it certainly helps smooth out the process.

HomeKit setup can often be confusing to novices because nearly every smart home device maker also makes its own app which can also be used to set up the device. Instructions vary—wildly—from brand to brand on this front. Some will direct you to start with the brand’s app, then switch over to Home at some point, and then switch back to the brand’s app to complete setup. Most of the time you can ignore the brand’s app altogether and just set things up in Home directly. Or you can ignore Home and just use the official app. Once setup is complete, you can generally use both apps to control the device, although that can present new challenges.

How do I interact with HomeKit devices?

As noted above, the big idea is that you interact with your HomeKit devices in the iOS Home app, but you can also use the device’s sanctioned app to do the same thing. In fact, in most brand-developed apps, you will not only find that brand’s devices, but HomeKit-compatible devices developed by other brands as well. This can quickly get confusing if you have a complicated, multi-vendor setup, and it can create challenges if, say, you set up automations or schedules in both apps. When schedules conflict, results can be unpredictable, so it’s advisable to stick to one app for control operations whenever possible.

Note that the official vendor apps for your devices should still be installed: You’ll need these apps for things like firmware updates on some devices, and many of these apps offer added features that the iOS Home app lacks (such as the ability to dynamically tune smart bulb color temperature over the course of a day).

While you can interact directly with a device via your phone, the real value of HomeKit comes from having a hub inside your house. Today, lots of devices can serve as a hub, including an AppleTV (third-generation or later), either of the HomePod speaker models, or an old iPad you have lying around (provided it doesn’t leave the house and is never turned off). A few other devices, including the Lutron Caséta Smart Bridge and the Insteon Hub Pro, can bridge the gap between smart home device and HomeKit, but they won’t allow you to control your HomeKit devices when you’re away from home. So, if you’re intent on building a HomeKit-enabled home today, you’re best off sticking with an Apple device as the hub.

Without a HomeKit hub, you can control your devices only when your phone is on the same local network (or within Bluetooth range, if the device supports it). The hub works by bridging your HomeKit devices to your router, then on to the internet. With a hub you can interact directly with devices when you’re away, as well as enable geofencing features such as turning on the lights automatically when you get home. If you don’t have a hub and you launch the Home app on your phone when you’re not home, your devices will appear as unresponsive.

How does HomeKit differ from Alexa, Google Assistant, SmartThings, and other ecosystems?

HomeKit has several similarities with these platforms, including support for the products of multiple vendors and the voice control features of Alexa and Google Home. You can create some version of rooms, scenes, and automations with each of these platforms, too. And as with those other platforms, products that support HomeKit are increasingly advertised as such, with a “Works with Apple HomeKit” logo appearing on the packaging.

The primary difference to consider is support: All four platforms support different vendors’ products, so you’ll need to consider carefully which devices you already own or intend to purchase if you’re interested in building your smart home around one of these platforms. For example, SmartThings is the only platform that supports Z-Wave devices. Alexa and SmartThings both support Zigbee devices. All four platforms support Wi-Fi and Bluetooth devices—but again, compatibility is determined on a product-by-product basis, not just the wireless standard it uses. (You’ll also find that some vendors sell one version of a product with HomeKit support and one without, confusing things further.)

As well, Alexa and Google Home products are more than just smart home platforms, built primarily around their voice-enabled smart speakers. You can ask Siri to set a timer or play music for you, but these are features of iOS, not HomeKit. Similarly, Alexa’s “Skills” system is nowhere to be found in HomeKit. Increasingly, HomeKit has been moving in this direction with the launch of the HomePod, but that device is hardly as an essential part of the HomeKit ecosystem the way an Amazon Echo is to Alexa.

Another major difference is, of course, HomeKit’s reliance on Apple products. If you’re a diehard Android user, HomeKit’s probably not for you.

Is HomeKit compatible with other platforms?

For the most part, yes. You can have HomeKit, Alexa, and Google Home all operating in the same household and all interacting with the same devices, presuming they have the necessary support. (And remember, almost all HomeKit devices will come with their own brand-created app as well.)

Problems can arise if you use different platforms to do the same thing. Theoretically you could connect one device to four or five different apps and use each of them to create a control schedule for that device. But this would of course be a catastrophic mess and is not recommended.

That said, it’s common for busier smart homes to include more than one of these platforms to control products that are not compatible with the other(s). But, increasingly and thankfully, broad compatibility with multiple platforms is becoming commonplace.

Do I need an iOS device to use HomeKit?

Yes. And to take advantage of all of HomeKit’s features, you need more than just an iPhone or iPad. If you want to use your HomeKit device away from your home, you need a hub as described above.

Again, while you need an iOS device to use the features of HomeKit, you can still use a HomeKit device without an iPhone. You will simply must use the vendor’s official app to interact with the device—or another third-party platform, such as Alexa, Google Home, or SmartThings if the device is compatible with one of those systems.

I’m an Android user. What can I do with HomeKit?

In a word: Nothing—at least not with your smartphone.

HomeKit works only with the Home app, and the Home app is only available on iOS devices. And there’s probably no hope that this will change any time soon.

Now, as described above, if you use Android and a device supports HomeKit, that does not mean you can’t use the device with your phone. You simply won’t be able to use HomeKit to set it up and manage it—unless you do it on an iPad. Instead, Android users should have no problem using the brand’s official smartphone app to set up and manage the product.

How secure is HomeKit?

HomeKit data is fully encrypted both at rest and in transit, and since Apple must approve every device in the HomeKit ecosystem, the platform is as secure as any other smart home platform. (Alexa and Google Home both encrypt data in a similar fashion.)

In 2019, Apple announced a new feature called HomeKit Secure Video, which allows HomeKit-enabled cameras to use iCloud for video storage. Naturally, there are heightened security concerns around cloud-based video storage and streaming than there are with, say, controlling a light switch over the internet, so Apple has been careful to ensure that HomeKit Secure Video streams are encrypted from end to end. Ring just introduced the same capability for its security cameras, but Apple offers the privacy advantage of performing any video analysis on your local HomeKit hub.

Additional security measures are also available in HomeKit Secure Video, such as the ability to restrict access to streams based on user and time of day. Apple has pointed out that the company doesn’t even have access to view your recordings.

How reliable is HomeKit?

Although the setup process is usually amazing, in this reviewer’s experience, HomeKit reliability during day-to-day use is actually fairly middling, and it’s my least favorite platform to use for control and automations. I encounter more problems with HomeKit losing its connection to devices, failing to start or stop automations, and generally not working as expected than I do on other platforms.

I’ve found the geofencing features on HomeKit to be particularly erratic, and the HomeKit interface isn’t terribly friendly, either. That said, no smart home platform has come up with a perfect interface or flawless operational record yet, so many of these criticisms also apply to other platforms. But while HomeKit and all products in this industry continue to evolve and improve, at present my interactions with HomeKit have been a bit lacking.